This week, the Grant Professionals Foundation (GPF) released its 2015 Annual Report, available on its website here. Long-time supporters of the Foundation will notice a new, streamlined approach to the report, covering a year’s worth of achievements in just eight powerful pages—about half the size of reports in previous years. This was a strategic decision designed to place emphasis on the impact of the people who are the Foundation: donors, volunteers, and scholars.

The report’s theme of “Making the World a Better Place, One Grant at a Time” has an important double meaning. The initial meaning is obvious. As grant professionals, the grants we help procure make an important impact on our communities, our countries, and the world. This is underscored at the bottom of the report’s page 6, where it discusses the findings of the 2014 Grant Professionals Impact Survey. Among the most astonishing statistics is the fact that survey respondents secured more than $1 billion in grant funding. Whether you worked on a proposal for $1,000, $10,000 or $10 million, you contributed to an immense amount of resources that were invested in changing people’s lives for the better.

The second meaning of “Making the World a Better Place” refers to the difference the Foundation’s donors and volunteers make in the lives of fellow grant professionals. This year’s report provides a representative snapshot of the people who received GPF scholarships. The Foundation provides support for attending GPA annual conferences, organizing GPA chapter regional conferences, joining GPA, and applying for the GPC credential exam. The four people highlighted on pages 3-4 of the report received different types of scholarships, but a common theme runs through their stories: GPF scholars feel like they are part of a community that understands their professional challenges. Every single GPF donor and volunteer makes a tremendous impact by helping to build a cadre of educated, connected, effective, and successful grant professionals.

As GPF Chair Kimberly Hays de Muga, GPC, so eloquently writes in the report’s opening letter, “Your gifts of time, talent, and treasure are building a long-term legacy for the grants profession.” Read the report to see that truth in action.

Please engage with the Auction and help support GPF and our work of providing scholarships to advance the grants profession. 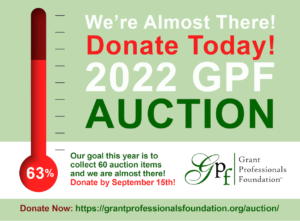